How do lithium ion batteries work?

Lithium-ion battery is a secondary battery (rechargeable battery), which mainly relies on Li + to intercalate and deintercalate between two electrodes to work. With the continuous development of downstream industries such as new energy vehicles, the production scale of lithium-ion batteries is continuously expanding. This article uses lithium cobaltate as an example to comprehensively explain the principle, formula and process of lithium-ion batteries, performance and testing of  lithium batteries, production precautions and design principles. 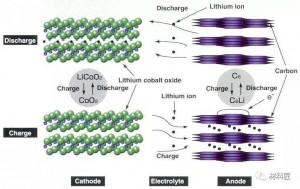 The positive electrode of the cell uses LiCoO2, LiNiO2, LiMn2O2. Among them, LiCoO2 is a crystalline form with a very stable layer structure. However, when x Li ions are removed from LiCoO2, its structure may change, but whether the change depends on the x size.

It is found through research that when x> 0.5, the structure of Li1-xCoO2 appears to be extremely unstable, crystal collapse will occur, and its external appearance is the overwhelming termination of the cell. Therefore, the value of x in Li1-xCoO2 should be controlled by limiting the charging voltage during the use of the battery. Generally, the charging voltage is not greater than 4.2V and x is less than 0.5. At this time, the crystal form of Li1-xCoO2 is still stable.

Unsuitable temperatures will trigger other chemical reactions inside the lithium-ion battery to generate compounds we do not want to see, so a protective temperature-controlling separator or electrolyte additive is provided between the positive and negative electrodes of many lithium-ion batteries. When the battery temperature rises to a certain level, the membrane hole of the composite membrane is closed or the electrolyte is denatured, the internal resistance of the battery increases until it is disconnected, and the battery no longer heats up to ensure that the battery charging temperature is normal.

Second, the formula and process of lithium battery